Well, we just sent our firstborn to Morehouse College, and I’m still trying to wrap my brain around the fact that this time has come.  Over the past couple months, I’ve been asked numerous times by numerous people, primarily parents, “What did you all do?” It’s very humbling to know you impact others through the way you rear your children, but that also comes with great responsibility to be transparent about your overall parenting experience.

There comes a point in the parenting process when you realize it’s one of the most important jobs you’ll ever have, and although the time frame is short, your performance evaluation extends for generations.  Once this fact truly settles in your brain, you move forward with purpose, understanding that although many may disagree with your practices, only you will stand accountable at the end.

So, as it pertains to rearing our oldest, a boy who loves Christ, cherishes his family, serves his community, and is now in college on academic scholarship, here are my thoughts.  Instead of trying to write about things I did, or we did, I chose to write from the perspective of what we tried really hard NOT to do.  Sometimes, a different perspective is just what the doctor ordered!

1. I did not take credit for the young man he has become. We are firm believers in the Will of God, and we believe without doubt, that His hand of grace, mercy, and favor has been over the life of our son.  Simply put, the credit all goes to our Lord.

2. I did not promote arrogance.  We teach our children that there is a very, very fine line between arrogance and confidence, and it is imperative they know the difference. If your life is all about “doing you,” you are of no good to anyone else.

3. I did not give him an option to attend church, bible study, or family devotion.  As for me and my house, we will serve The Lord. He understood that every Sunday morning he was going to church, every Wednesday evening he was going to church, and every Monday night he would participate, and often lead, family devotion.  These were never offered as options, but yet requirements for living in our house.

4. I did not relinquish control, negotiate, or felt the need to always offer explanations or discussions.  One thing has always been clear in our home, and that’s who’s in control.  Many believe control is a bad word, but self-control is birthed out of external control.  A child doesn’t gain self-control by way of osmosis, he must be taught/guided.  Today, many children, especially teenagers are in control, due to parents who’ve made it that way.  We understand open dialogue is healthy when agreed upon by the parents.  However, we also think it’s very important for children to understand they are to do certain things without question, hesitation, explanation, or discussions.  Something’s are final for no other reason than the fact your parents have said so.  Our children must understand that our position is enough, and no one “owes” them an explanation.  Our pastor says it is the responsibility of the parents to take a child from moral duty (because I said so) to moral responsibility (because it is the right thing to do).  It is unrealistic to expect moral responsibility without a sense of moral duty.

5. Although I considered myself overprotective, I did not protect him to the point of keeping him from opportunities and lessons that would support his growing independence.  He first rode an airplane alone at the age of 14.  I remember dropping him off to the curbside check-in and reminding him to READ to make sure he ended up in the right place…and yes, there was a connecting flight.  I intentionally refrained from parking the car or walking him to his gate.   At age 12, he was given a checking account and debit card and begin to learn real lessons on spending, saving, and balancing.  At 13, he endured his first important interview.  By age 17, he decided he wanted to leave the country to travel to Honduras with a school mission group. We knew such small experiences were big steps toward his growing to be a man who could independently and confidently handle business.

6. I did not refuse or disregard advice or critiques of my children or my parenting practices, especially those that came from other mothers such as my mother and mother-in-law.  I believe in the beauty of community, and I think it’s required for successful rearing of children.  Every now and then, as a parent, you need to be “called-out” and corrected.  Most mothers today do not want anyone telling them anything about their parenting, and they dare anyone to say something to their children. In my opinion, an offense is something that must be taken.  Instead of taking offense by someone reading me my rights as it pertained to parenting my son, I self-assessed and made the necessary adjustments on my end.

7. I did not spare the rod.  No explanation needed.

8. I did not shield him from a community of parents, nor did I intervene when others saw fit to discipline him.  The parenting of our son was not limited to my husband and I.  We recognized early on the benefits of a community of mothers and fathers, and we intentionally saturated him with such, insisting he developed bonds with other great women and men.  Not only were these people encouraged to guide and share wisdom, but they were also encouraged to discipline and direct.  He knew there were eyes and rods beyond his father and I.

9. I did not give allowance or pay for grades, chores, etc.  Chores and academic hustle are two of many requirements for living in our house.  And everything we require, we do so with an expectancy of excellence, and an understanding that it will help our children in the end.  We do not believe it is our responsibility to pay you for doing such.  In our opinion, you will reap the real payment when you realize those tasks and responsibilities were practice for success in life, and because you were required to do so, you’re miles ahead.

10. I did not assume his responsibility or handle his business.  If we fail at rearing a responsible boy, we set him up to become an irresponsible man, struggling to independently provide for himself and his family.  Before our son entered the college admission process, we decided there were many things we would NOT do.  Getting into college and obtaining scholarships to pay for it were his responsibility, not ours. Therefore, we did not complete applications, request transcripts, watch deadlines, or make the necessary follow-up phone calls to universities.  He understood the importance of this process and its impact on the rest of his life, so he had to handle his own business.

11. I did not tolerate unacceptable behavior, make excuses, or write it off as “normal”… normal toddler behavior, normal teenage funk, or any other so-called “normal” stage of life; nor did I blame others (teachers, friends, etc..) or hold them accountable for his actions and behavior.  If a teacher, administrator, or other adult within our community informed us of inappropriate behavior, the last thing we were interested in was his side of the story. We also refrained from blaming others for decisions he made.  If being outright disrespectful, disobedient, and out of control constitutes normal behavior, we surely reared an abnormal kid.

12.  I never assumed a teacher, administrator, or school was responsible for educating my son.  We always declared we held the primary responsibility of educating our children.  And although his education consisted of many aspects, including school, it was unacceptable to consider school the extent to which he would be educated.  Whatever school offered was considered the bare minimum in comparison to what we and others would add.

13. I did not clean up behind him or clean up for him.  Unfortunately, I’m not the mother who cleans the boy’s room, picks up his things, does his laundry, or irons his clothes.  Nor am I the mother who enters the dormitory room ahead of him with my rubber gloves, bucket, and Lysol.  Nope, you’re going to do those things for yourself and, in the process, wash and iron my clothes every now and then.

14. I did not buy or give him expensive possessions such as Jordans, gaming systems, Beats, smart phones, iPads, or anything else he couldn’t afford, nor did I allow him to get a tattoo or pierce either of his ears. We believe delayed gratification and responsibility produce a different kind of man.  For some strange reason, children really appreciate and care for those things they have to purchase themselves, with their own money. I refused to create a lifestyle of luxury that he can’t realistically maintain independently as a young adult.  At 17, he wanted to transition from the old flip phone we bought to a “smart” phone with email and internet access.  In order to do so, he was required to buy the phone as well as pay his own monthly data charges, and those charges must be fronted to us, a year’s total at a time.  As for the earrings and tattoos, they made no sense to us, Selders men do not wear them, and therefore, they were forbidden in our home.

15. I did not give or make alternatives for prepared dinner.  In our house, we eat dinner as a family, at the kitchen table.  You eat what is prepared, you participate in the family conversation, and there are no other options.

16. I did not assume I possessed the ability to rear a man, so I instead left that responsibility to his father, grandfather, uncles, and a community of other great men.  So often mothers, even those with husbands in the home, battle a “take-over” spirit.  For some reason, we refuse to let the man lead, especially in rearing our sons.  No woman has endured the experience of becoming and being a man, which makes it very difficult for us to rear one alone.  I chose not to try.

17. I did not stop telling him I loved him, and I expected his love in return.  Absolutely every day for 18 years, I have verbally expressed my love to my son…every night before he headed to bed, every morning before he headed to school, and times in between.  And everyday, I reminded him that his love was owed back to us through his actions and decisions.  Sometimes, we invest so much in our children without teaching them their responsibility in the return.  If the expectation of the return is not voiced, then how can we hold them accountable to all we’ve invested?

18. Lastly, I never say never! This is only my 18th year of parenting and two weeks post my first child going off to college.  I refuse to say what he won’t do or will never become.  I understand the magnitude of free will and choices, even when tools and intentional parenting are implemented.  If I teach him to believe failure is not an option, I put him at a disadvantage because that is not reality.  Instead, he and I must both acknowledge that failure is always an option.  And if he insists on choosing that option, my husband and I must allow the fall.  In addition, mistakes and setbacks happen.  And if they do, we hope to be his first line of aid and encouragement! 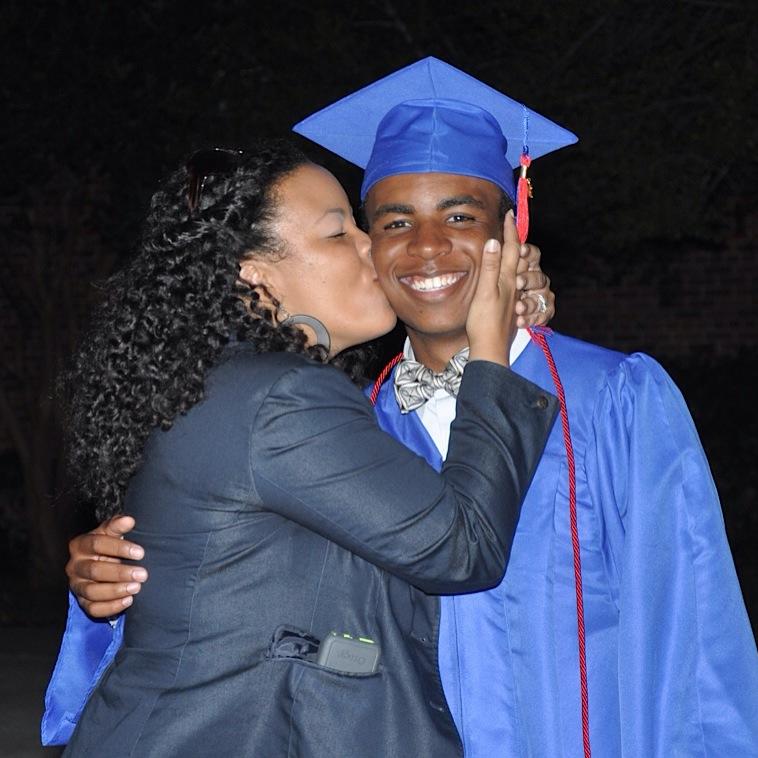